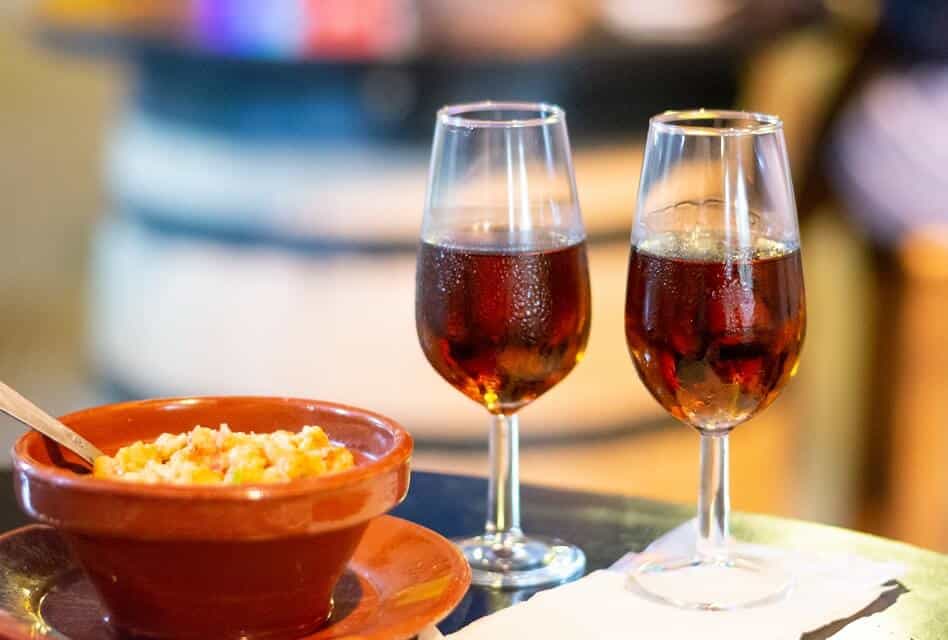 Sherry is probably one of the most popular types of fortified wine. You can find different types that please dry wine lovers as well as people that prefer sweet styles. If you belong to the first group, there is one special type of Sherry that you definitely should try: Amontillado Sherry.

Amontillado is a special type of Sherry, a fortified wine from Spain. It is made from white grapes and undergoes a unique aging and fortification process. The result is a dry wine with a yellow to brown color and an alcohol content of around 20%.

There is not only one style of Amontillado, though. Vintners create numerous variations that differ by age, origin, and taste. In this article, we will discuss these styles, how they are made, and how to enjoy them best.

WHERE DOES AMONTILLADO COME FROM?

Vintners in the region of Andalusia in Southern Spain produced Amontillado for the first time in the 18th century. Reports say that they invented it by accident.

By that time, it was common to transport fine wines on oxcarts over hundreds of miles. One highly frequented route was the street from Montilla to the coastal city of Jerez. During this journey of about 120 miles (200 kilometers), the wines were exposed to high temperatures and leaks that got them in touch with air.

These leaks caused oxidation that resulted in a film of “rust” on the wine’s surface. Vintners initially considered this a fault with the potential to ruin the wine. But it turned out that the rust film altered the wine’s taste positively by adding new aromas to it. Therefore, they started to replicate this procedure intentionally.

Today, Amontillado wines come from the “Sherry Zone” or “Sherry Triangle” in the South of Spain. This zone is located between the cities of El Puerto de Santa María, Jerez de la Frontera, and Sanlúcar de Barrameda.

WHAT IS AMONTILLADO SHERRY MADE FROM?

White Palomino grapes are the basis for Amontillado. This varietal is one of the most widespread in Southern Spain. As it produces wines that are low in both sugar and acidity, it’s the best varietal to make Sherry.

HOW AMONTILLADO IS MADE

The first part of the production process is similar to making Fino Sherry: The winemakers produce a somewhat neutral, dry must from the crushed grapes. Then, they leave this must to age in oak barrels under a layer of flor. Flor is a white crust of yeast that naturally develops during the aging process and feeds on oxygen and alcohol. It functions as a shield that isolates the wine from the air, so it does not oxidize too quickly.

This process is called “biological aging” and gives this Sherry a pungent yeasty character. The longer it takes, the stronger will be the yeasty notes of the wine. Typically, biological aging takes between two and eight years. By this time, the yeast consumes all of the nutrients in the wine, and the flor crust becomes unstable.

At this point, the winemakers end the first maturing phase by adding alcohol. The alcohol kills the flor crust and brings the wine to a level of about 17% alc.

The next step in the production process is a second maturation phase, which is typical for Oloroso Sherry: “oxidative aging”. The winemakers further age their wines by using the Solera method. The exposure to oxygen causes the wines to concentrate and increases their alcohol level. Besides, it gives the wine its typical amber-golden color. This oxidative aging phase is significantly longer than the biological aging period. It can take 10 to 30 years and, in some cases, even longer.

Amontillado is a dry Sherry with a residual sugar content of fewer than 5 grams per liter. With 16 to 22% alcohol, it is quite strong. Nevertheless, good Amontillado wines are smooth and harmonious, with well-balanced acidity. They are not as crisp as Fino or Manzanilla Sherry, but they offer a more complex and elegant mix of aromas. You can taste caramel, almonds, roasted nuts, figs, raisins, mushrooms, tobacco, and different herbs. Besides, you can expect a long finish and a lingering wooden aftertaste.

As mentioned, you can find several types of Amontillado Sherry. They differ in taste and color, depending on the specific aging processes they go through. Wines that undergo a long biological aging phase come with sharp yeasty aromas. They are typically rather pale in color. On the other hand, those Sherries that spent much time aging oxidatively have more significant herbal and wooden notes. They usually are darker with colors in the brownish spectrum.

Here are some terms you might encounter on the labels of Amontillado wines and what they mean:

HOW TO SERVE AMONTILLADO SHERRY

Like most dessert wines, Amontillado should come in small portions of about 3 oz. (75 to 100 ml). But the right glass and temperature are more important than the serving size.

What Is the Right Glass?

Your first thought might be to serve Amontillado in a traditional Sherry glass. But actually, this glass does not benefit your drinking experience because it does not allow the wine’s bouquet to develop. Also, its small opening makes it hard to get your nose inside to enjoy the aromas.

Thus, you should use a regular tulip-shaped white wine glass. Make sure to fill only a quarter of it, though. Alternatively, you can use a Riedel Sherry glass with a bigger bowl and mouth than regular Sherry glasses.

What Is the Right Serving Temperature for Amontillado?

Serve Amontillado Sherry cool but not too cold. Aim for 53 to 57°F (12-14°C). If you store the bottle in your cellar, it probably has the perfect serving temperature when you get it out. Very old styles are good at even higher temperatures.

Should You Decant Amontillado?

It is not necessary to decant Amontillado. Just enjoy it as soon as you open the bottle.

HOW TO STORE AMONTILLADO

A bottle of Amontillado must remain in a cool, dark place, like your cellar. Unlike most table wines, the bottle should stand upright.

Can Amontillado Sherry Be Aged?

Amontillado ages in barrels for years, sometimes even decades. When bottled, its aging potential is exhausted. Thus, Amontillado will not get better if you age it further in your cellar. Store it not longer than two years to ensure you can enjoy it to its full potential.

Amontillado Sherry can go off, just like any other fortified or non-fortified wine. As soon as you expose it to air, it will continue to oxidize and eventually spoil.

How Long Does Amontillado Last When Open?

After opening it, Amontillado can last for several weeks, given you close the bottle and put it into your fridge. However, it is a bit risky to store it for more than a couple of days.

You might sense a significant change in taste and aroma pretty soon after opening it, especially for old wines. This distinct acidic note might come across as a sign that the wine went off. In many cases, it will disappear one or two weeks later, though, so you can enjoy the rest of the wine. Only in rare cases will it not disappear because the wine is actually ruined.

To make sure that you do not have to pour your Sherry away, better consume it quickly after opening the bottle.

WHICH FOOD GOES WITH AMONTILLADO SHERRY?

The intense dry flavor of Amontillado opens a lot of opportunities for food pairings:

However, the best pairings for Amontillado are traditional Spanish delicacies. It is delicious with Jamón Iberico and similar hams, chorizo, dates or figs wrapped in bacon, and spicy hard cheeses. And if you like it simple, you can also enjoy it with nuts or almonds.

When shopping Amontillado, pay special attention to the exact name on the bottle label. Besides Sherry, you will find other drinks with Amontillado in their names, such as Amontillado Brandy or Amontillado Whiskey. These are liquors based on Amontillado, but they are much stronger in alcohol and quite different in taste.

Amontillado Sherry typically comes in bottles of 375ml, 500ml, or 750ml. For an entry-level wine of the latter size, expect to pay between 10 and 30 USD. Better Amontillados cost between 40 and 80 USD, and high-quality V.O.S. or V.O.R.S. wines can cost hundreds of dollars.

Amontillado is a remarkable fortified wine that represents some of the oldest traditions of Spanish winemaking. As it combines the maturation techniques of Fino and Oloroso Sherry, you can consider it the most sophisticated type of Sherry. And with the many food pairing options it provides, it is a great add-on to every dinner night.