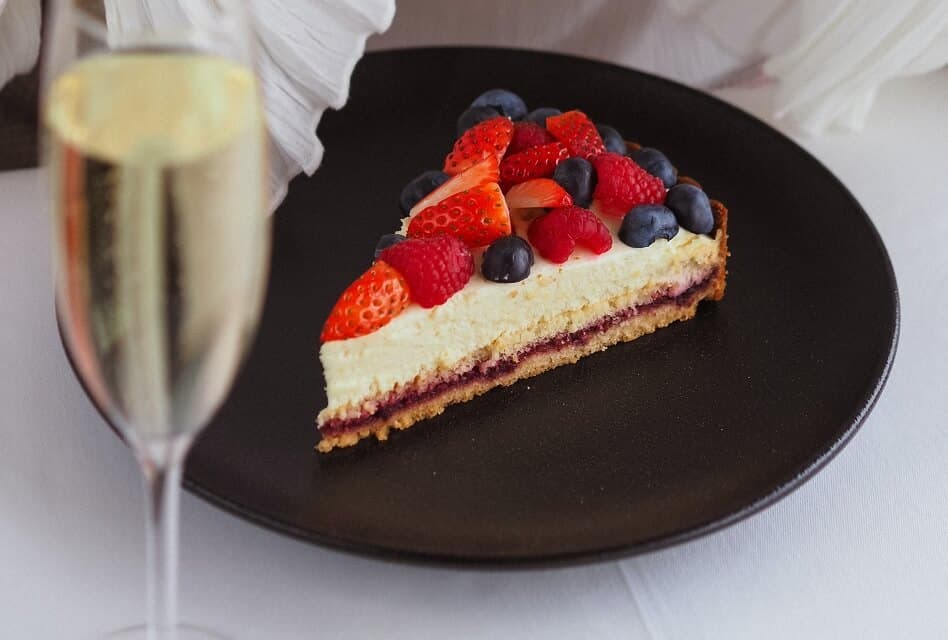 Dessert wines are sweet wines that you can enjoy with or instead of a dessert. Vintners use various techniques to produce dessert wines that can be red or white, still or sparkling, and range from light to extremely rich.

Actually, there is no carved-in-stone definition for dessert wine. Some wine lovers put all sweet wines into the dessert wine category; others define an alcohol volume of at least 14% as the deciding factor. Both of these approaches are rather vague. To give you a thorough overview, we will include all sweet wines of a certain quality in this article, no matter the alcohol content.

THE DIFFERENT TYPES OF DESSERT WINE

Dessert wines come in many different variations. Roughly, we can distinguish five categories:

Some dessert wines, such as Port, Madeira, or Commandaria, are fortified. That means that vintners add a strong spirit to the wine must before the fermentation is completed. As a result, plenty of natural grape sugar remains in the wine, giving it a very sweet taste. In addition, the spirit increases the wine’s alcohol content massively, often to volumes of around 20%.

HOW DESSERT WINE IS MADE

Vintners follow multiple methods to make dessert wines. They are roughly the same as table winemaking but differ in single aspects.

In the following paragraphs, we will briefly discuss how to make different wine types. For more detailed information, check out the linked articles about the specific wines.

Noble rot wines are a special sub-type of dessert wines. Their sweetness results from a fungus that infects the vines. It covers the grapes and dehydrates them but does not damage them seriously. These grapes only have a tiny bit of juice left when harvested, but this juice is incredibly sweet. And vintners can create delicious wines from them.

These are the most prestigious types of noble rot wines:

The making of ice wines follows a similar pattern as noble rot wine production. But instead of a fungus, vintners rely on temperature to transform their grapes. They let the fruits out on the vines until the first frost. When that happens, most of the grape juice freezes. Only a tiny portion stays liquid, but this portion contains all of the grape sugar. And when pressed and proceeded, it produces highly concentrated wines.

You can find fantastic ice wines from basically two parts of the world:

Winemakers who aim to make late-harvest wines let their grapes stay on the vines very long, too. However, they do not wait for frost or a fungus to infect them. Instead, they let the grapes enjoy additional weeks of sunshine, leading to higher sugar content. These grapes are not as sweet as noble rot or frozen grapes when harvested, but they contain significantly more juice.

Great late-harvest wines come from several places. Most of them have a relatively cool climate:

The production of fortified wines is very different from all the other techniques we have discussed so far. In contrast to late harvest wines, ice wines, or noble rot wines, the deciding stage is not the growth period. Instead, winemakers define the wine’s sweetness during the fermentation process.

Naturally, the yeast cells that vintners add to the wine must transform all grape sugar into alcohol. But when making fortified wines, winemakers stop this process prematurely by adding a spirit such as brandy. The concentrated alcohol kills the yeast cells so that the transformation stops. Consequently, plenty of grape sugar stays in the wine, making it a very sweet drink. At the same time, the spirit increases the alcohol content to 20% vol (and sometimes even more).

After fermentation and fortification, many of these dessert wines undergo extensive barrel aging that might take several decades. As a result, fortified wines belong to the richest and most complex of all dessert wines.

These are the most prestigious fortified dessert wines:

If you are a sparkling wine lover, you can find many delicious wines with bubbles matching your preferences. Typically, the production of sparkling dessert wines follows the same techniques that vintners use to make dry sparklers.

These are the most popular types:

HOW DOES DESSERT WINE TASTE?

Logically, dessert wines are sweet. The level of sweetness can differ drastically, though. Some wines have a somewhat subtle sweetness, for instance, Sauternes or Moscato wines. Others, such as Port or sweet Sherry, are more intense and often sweeter than soft drinks. And in some cases, they are so overwhelmingly sweet that you can only enjoy tiny portions of them. One famous example of these highly concentrated wines is Tokaji Essencia, which is typically served on a spoon instead of a glass.

The aromas of dessert wine can vary as well. Many feature delicious notes of citrus, berries, and other fruits. With age, they develop more complex and often offer aromas such as caramel, honey, dried fruits, nuts, and spices.

How Much Residual Sugar Is in Dessert Wine?

Dessert wines are very high in sugar, some even higher than soft drinks. They can range from 50 to more than 200 grams per liter. The following list gives you more details:

How Much Alcohol Is in Dessert Wine?

Dessert wines range from 6 to 25% vol. The alcohol content depends on the production process, so different types have different alcohol volumes:

HOW TO STORE DESSERT WINE

When storing wines, no matter whether they are sweet or dry, you should follow these rules:

A dessert wine can go bad when exposed to sunlight, oxygen, vibrations, or aggressive smells for too long. Many types, especially fortified wines, have a higher resilience than table wines, though. In any case, you should provide optimal storage conditions to reduce the risk of spoilage.

How Long Can Dessert Wine Last in the Fridge?

An open bottle typically lasts slightly longer than a bottle of table wine. Ice wine lasts 3 to 5 days, while Sauternes and other noble rot wines stay enjoyable for about one week.

Fortified wines have a much longer life span after uncorking them. They last for one month at least, and most will be fine even longer. With alcohol contents of 20% or more, you might not even need to chill them in the fridge. In any case, you need to protect them from direct sunlight.

HOW TO SERVE DESSERT WINES

As their name suggests, dessert wines are meant to be enjoyed as the last course of a dinner. You can either combine them with a dessert or drink them instead. And, of course, you can also have a glass on its own without any food nearby.

In any case, the serving temperature is crucial for maximizing your drinking experience. Also, choose the proper glassware to give your dessert wine a chance to shine.

What Is the Right Serving Temperature for Dessert Wine?

The optimal serving temperature depends on the specific type of wine. The following table gives you the details:

What Is the Right Glass for Dessert Wine?

For some types, you can find specific glasses designed to showcase the wine’s characteristics. For instance, there are special Sherry glasses, Port wine glasses, and Sauternes glasses.

If you don’t own these particular glasses, you can also use a regular white wine glass. However, you should limit the served portion to 2 to 3 oz (60-90 ml). That is about half of the usual white wine serving.

Should You Decant Dessert Wine?

Most dessert wines benefit from decanting because they can release their full aromas. Especially very old bottles also might contain sediments, and by decanting them, you can filter these sediments out.

There are some dessert wines that you should not decant, though:

WHY IS DESSERT WINE EXPENSIVE?

Not every sweet wine is expensive, but some are significantly more costly than table wines. And there are several reasons for these price tags.

First of all, the weather is a crucial factor. Too much rain, too little sunshine, or severe storms can reduce grape quality or destroy an entire harvest. That is true for all types of wine for sure, but dessert wines are even more prone to negative weather effects. For instance, if frost does not set in because it is too warm, the grapes for ice wine cannot freeze. As a result, vintners simply cannot make any ice wine this year. The same might be true for noble rot wine, as it needs very specific conditions for the fungus to spread without completely destroying the grapes.

In many cases, vintners cannot extract much juice from their grapes when making dessert wines. For instance, frozen grapes for making ice wine release only 10-20% of the juice that non-frozen grapes for table wines produce. Thus, the output per hectare of vines is significantly lower, which is reflected in the price.

The same is true for noble rot wines such as Tokaji or Sauternes. The sun-dried grapes release similarly low amounts of juice, limiting the output and increasing the prices for these wines.

Another factor that makes some dessert wines expensive is the extensive aging period. Some wines, like Port wine or Madeira, spend decades in oak barrels to reach their full potential. Of course, this time results in higher prices.

Many wine lovers categorically reject sweet dessert wines, but that might be a mistake. Even if you are not the biggest fan of sweet dishes and candy, dessert wines are worth a sip. Some are similarly complex as dessert wines and offer an outstanding drinking experience. So why don’t you try a bottle to finish your next dinner party?