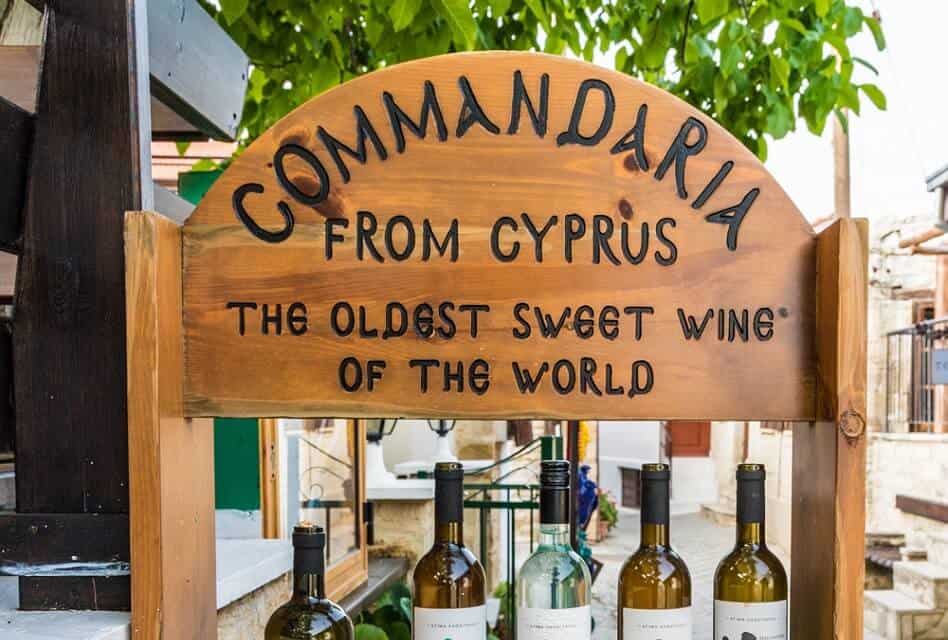 Wine is one of the world’s oldest beverages. Its history started about 7,000 years ago in the Caucasus. Through the ages, winemaking techniques changed significantly, new wine styles were created, and others disappeared. But some wines have survived the centuries without changing much. One of these wines is Commandaria.

Commandaria is an amber-colored dessert wine from Cyprus. Typically, it is fortified, with an alcohol content of about 15%, but that is not mandatory. The wines are viscous and sweet, with intense aromas of dried fruits, marzipan, nuts, or spices.

The wine has a fascinating history that involves one of the most famous royalties of all time. If you want to know who it is, and how Commandaria wines are made, this article is for you.

WHERE DOES COMMANDARIA COME FROM?

The home of Commandaria wine is Cyprus, an island (and country) in the Mediterranean Sea. More specifically, the wine comes from a region 20 miles north of Limassol, the island’s second-largest city.

The Commandaria region has DOC status, so it is protected in the European Union, the United States, and Canada. It includes only 14 villages where vintners may produce the wine.

THE HISTORY OF COMMANDARIA WINE

Commandaria is the world’s oldest named wine that’s still in production. The ancient Greeks knew this wine style 800 years before Christ. For many centuries, they referred to it as “Cypriot Manna”.

In 1191, Cyprus became the target of the crusaders led by King Richard the Lionheart of England. A ship, carrying his fiancée Berengaria and his sister Joan, was separated from his fleet in a storm. It shipwrecked on the island’s coast, and Isaac Doukas Komnenos, then ruler of Cyprus, took the women hostage. As he refused to release them, Richard and his troops invaded the island on June 1st. They conquered Limassol, freed his bride and sister, and imprisoned Isaac.

The next year, Richard and Berengaria celebrated their wedding in Limassol. During the festivity, they drank Commandaria wine. And the English king enjoyed it so much that he praised it as the “wine of kings and king of wines”.

Just weeks later, the crusaders continued their campaign, heading toward Syria. Richard sold Cyprus to the Knights Templar, who resold it to the French knight Guy of Lusignan. But they kept a feudal estate at Kolossi, a village on the outskirts of Limassol. This estate was called “La Grande Commanderie” (English: the great commandery) to distinguish it from two smaller outposts on the island.

On their land, the templars started producing large quantities of wine and exported it to Europe’s royal houses. Due to their estate’s name, the wine became famous as “Commandaria”. Over the centuries, production volumes and export numbers increased. During the reign of Queen Elizabeth I. in the 16th century, the sweet Cypriot wine was one of the most popular wines in Europe.

But with the Turkish invasion of Cyprus in 1571, vintners faced severe obstacles. Massive taxation by the new rulers made the wine business unprofitable for about 300 years. Logically, the production levels declined massively during that time.

When the British took over the island’s administration in 1871, wine producers tried a comeback. But meanwhile, other sweet dessert wines such as Sherry and Port had gained significant market shares. And the wine from Cyprus could not make it back to its old fame.

In 1960, Cyprus became an independent republic. Since then, many efforts have been put into production processes and marketing. Vintners founded numerous small wineries with a focus on high-quality wines. And the Commandaria region even got a protected DOC status with its own production rules. While output numbers significantly increased in the 2000s, this Cypriot wine still is little known among wine lovers.

WHAT IS COMMANDARIA WINE MADE FROM?

Cypriot vintners use only two grape varieties to produce Commandaria wines: White Xynisteri grapes and red Mavro grapes. Both are native to the island and almost unknown in other wine countries. Their durability against diseases and parasites and their robustness to the hot Mediterranean climate make them perfect varietals to cultivate in Cyprus.

Most vintners make their dessert wines from a mix of both varietals. As there is no mandated ratio, they can freely decide which portions they want to use.

These grapes are not only used for Commandaria. They are also the basis for many local red and white table wines. Besides, the Cypriots make a spirit called Zivania from them.

HOW IS COMMANDARIA MADE?

The production of Commandaria wines has some unique elements that make them very special.

One of these unique elements is the ripening process of the Xynisteri and Mavro grapes. Vintners cultivate both varietals on the slopes of the Troodos Mountains, at altitudes of 500 to 900 meters. According to Cypriot wine laws, all vines must be at least four years old to qualify for Commandaria wines.

The grapes stay on these vines until mid-September to early October. By that time, they are overripe and contain a very high level of sugar. The sloped, high-altitude vineyards force the vintners to harvest them manually.

The second unique step happens after the harvest: The vintners lay the grapes out in the sun for one to three weeks. While they slowly dry, a significant portion of their liquids evaporate. As a result, the sugar density in the remaining grape juice rises even further.

After the pressing, the grape juice ferments in big containers. In some cases, the winemakers fortify it at this point. To do so, they add either pure grape alcohol or a wine distillate of at least 70% alcohol. Fortification isn’t mandatory, though. If the grapes are sweet enough, the wine can gain the desired level of alcohol solely by fermentation, without artificial fortification.

What is mandatory, though, is the aging process. By law, all wines must ripen for at least two years in big oak barrels. But it is not uncommon that they age much longer. The best styles stay in oak for 15 years or even longer. During the aging process, the wine gets darker in color.

The Cypriots follow an aging technique, which is similar to the Spanish “Solera Method”: While aging, the wine slowly dissolves. To ensure that the barrels do not contain too much air, the vintners top up these older vintages with fresh wines. So most wines are actually blended from multiple vintages.

Finally, the wines are bottled, traditionally in small, wide-bodied bottles.

HOW DOES COMMANDARIA WINE TASTE?

Commandaria wine is a sweet, full-bodied wine with a thick consistency and a high alcohol level. It must have between 10% and 20% vol. by law, but commonly, it has around 15%.

After excessive aging, the Cyprian wine has strong, concentrated aromas of coffee, caramel, honey, marzipan, and dried fruits such as apricots, figs, or raisins. You can also sense nuts or subtle wooden and spicy notes.

Modern wineries nowadays produce some fresher wines. These don’t undergo a fortification process, so they are less heavy and not as syrupy as traditional styles. Although they are also sweet, they have good acidity to create a well-balanced drinking experience.

HOW TO SERVE COMMANDARIA WINE?

Commandaria is a dessert wine like Port, Madeira, or Sherry. So it is common to serve it either with or after the last course of your meal. Some people also drink it as an aperitif before dinner, but that’s rather unusual.

What Is the Right Serving Temperature for Commandaria?

Commandaria is best when slightly chilled. Serve it at around 50 to 57°F (10-14°C). Do not worry too much about the perfect temperature, though. Even at room temperature, Commandaria is delicious and won’t lose any characteristic flavor.

What Is the Right Glass for Commandaria?

Like all dessert wines, you should serve Commandaria in small portions. So a Port glass or a similar glass with a small bowl, inwardly sloping sides, and a short stem is perfect. Alternatively, a Sherry wine glass is acceptable as well.

Should You Decant Commandaria?

Decanting allows the wine to open up and release all of its aromas. Besides, Commandaria bottles can contain some sediment, and by decanting, you can get rid of it. To enjoy its bouquet to the fullest, decant it for up to 6 hours before serving it.

HOW TO STORE COMMANDARIA WINE?

Store your Commandaria wine like a Port or a Madeira: Put it in your cellar at cool temperatures, protect it from sunlight, and it will keep for years.

Can Commandaria Be Aged?

Commandaria has excellent aging potential. If you cellar it in the right conditions, the wine will get better and better over the years. You can age it for decades, even centuries. So if you want to leave your unborn great-grandkids something special for their retirement party, the dessert wine from Cyprus is the right choice.

In theory, constant exposure to high temperatures, drastic temperature changes, sunlight, or oxygen can cause Commandaria to go off.

However, in practice, it is unlikely that it will happen. As it is fortified and undergoes an aging process of several years, Commandaria is much more robust than table wines. You have to mistreat it deliberately to ruin it.

How Long Does Commandaria Last When Open?

Due to its high alcohol content, Commandaria lasts much longer when opened than table wines. Even when stored at room temperature, you can enjoy it for up to 6 months. Nevertheless, it is never a bad idea to put it into the fridge to prolong its lifespan.

As mentioned before, Commandaria is a protected appellation. So if you find this term on a bottle, you can be sure that it is the original dessert wine from Cyprus.

You need to read carefully, though. Variations of the term that look very similar are not protected. For instance, the word “commanderie” is part of some French wine estate names. And you might also find the term “commander” on table wine bottles from the United States or Australia.

It might be challenging to find a shop with a big selection of different wines. But many should have at least one or two styles. The most common one in the United States is KEO St. John.

Commandaria is not only one of the oldest wines; it also has a fascinating history. Despite massive obstacles, Cypriot winemakers managed to keep the quality of their delicious dessert wine throughout the centuries. If you are into dessert wine, you definitely should try this “wine of kings and king of wines”.