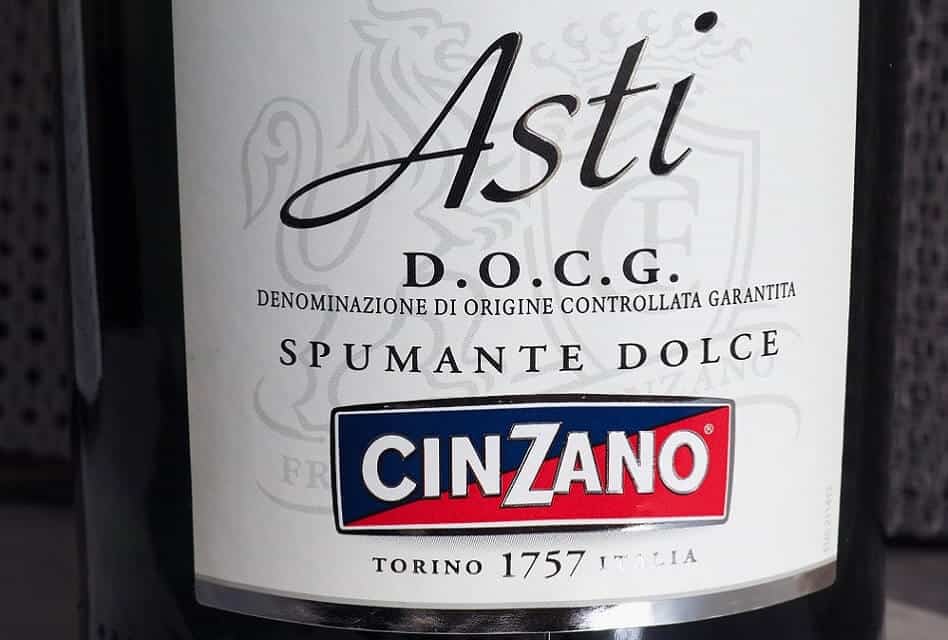 Typically, sparkling wines are special occasion drinks. People serve them to toast an anniversary, a wedding, or a successfully closed deal. But have you ever drunk sparkling wine for dinner? If you have not but are open to new wine experiences, you might want to read about Asti.

Asti (also known as Asti Spumante) is a white sparkling wine from the Piedmont region in Northern Italy. It’s sweet in taste with fruity aromas and has a rather low alcohol content. It undergoes a specific production process called the “Asti Method” and is subject to strict wine laws.

It is easy to confuse the sparkler with its cousin Moscato d’Asti. And indeed, they are very similar but not exactly the same. In the following paragraphs, we will discuss the differences as well as more details about Asti Spumante.

WHAT IS ASTI MADE FROM?

Asti is made from Moscato Bianco. According to Italian wine laws, winemakers must not use other varietals for its production.

Moscato Bianco is one of the oldest varietals from Italy. But vintners grow it in many other places around the world too. Depending on the country, it might have an alternative name:

ASTI VS. MOSCATO D’ASTI: ARE THEY THE SAME?

Asti Spumante and Moscato d’Asti are not the same. Although they undergo the same production process and have similar aromas, they differ in one important aspect: the latter is a semi-sparkling wine, while Asti is a full sparker.

In other words, the bubbly experience of Moscato d’Asti is less intense than the fizzyness of the full-sparkling version. The reason for this difference is the fermentation process: Asti undergoes a longer fermentation that results in a higher level of CO2. During this process, more sugar turns into alcohol, making it also slightly stronger than Moscato d’Asti. Typically, it has an alcohol content between 6 and 9%, while its semi-sparkling cousin has only 5.5%.

HOW ASTI IS MADE

The Moscato Bianco grapes grow on the hills of Piedmont. They are hard to cultivate and ripen late in the year. During their long growing season, they are very vulnerable to mildew, grey rot, berry moths, and other diseases and pests. Thus, winemakers must invest much time and work into keeping the grapes healthy. But even if they succeed, Moscato Bianco produces low yields in comparison to other varietals.

The harvest typically takes place in the middle of September when the grapes contain the optimal amount of sugar. To ensure that they do no harm to the grapes, workers do not use machines and harvest by hand. The crushing and pressing of the grapes happen without modern technology as well. Instead, vintners use manual presses to squeeze the juice out of the grapes gently.

Until now, the production method doesn’t differ from the methods to make other still or sparkling wines. But the fermentation process of the wine must is extraordinary. Primarily because winemakers prevent the fermentation of most of the wine must. They do so by cooling down the must containers to temperatures close to the freezing point. The reason is simple: They produce Asti throughout the whole year, and they need fresh wine must to do so.

Every two months or so, vintners start to process a new batch. First, they transfer the must into stainless steel tanks and seal them. Then they heat them to about 60°F (15°C) to start the fermentation process. While the sugar in the must slowly turns into alcohol, CO2 forms inside. But as the tanks are sealed, this CO2 can’t escape. Instead, it stays in the wine and gives it the typical sparkling characteristic.

When the wine reaches its desired level of alcohol (typically about 7.5%), the winemakers cool down the tanks to stop the fermentation. They use a centrifuge to remove the remaining yeast and bottle the wine. Unlike many other sparkling wines, Asti doesn’t undergo a second bottle fermentation process, so it’s ready for consumption at this point.

Asti comes with a great balance of sweetness and acidity. Like many other Moscato wines, it has fruity aromas of citrus, orange, and apricots. It is similarly fizzy to other sparkling wines such as Champagne or Prosecco. But due to its low level of alcohol, it is significantly lighter: While Prosecco has around 11% and Champagne about 12%, Asti comes with only 6 to 9%.

WHERE DOES ASTI COME FROM?

Asti comes from the region of Piedmont in Northern Italy. Only sparkling wine that comes from one of 52 communes in the provinces Asti, Alessandria, and Cuneo can carry this name. This region is a protected appellation with DOCG status, which only the best Italian wines have.

Carlo Gancia was the first to produce Asti in the 1870s. He studied winemaking in Champagne and aimed to create a beverage similar to the famous French sparkling wine. He copied the traditional Champagne method by fermenting his wine twice: first in tanks and afterward in bottles. As he used the Italian varietal Moscato Bianco for this purpose, he named his first wines “Moscato Champagne”.

In the early 20th century, production methods changed. Since then, the wine undergoes only one phase of fermentation. Bottle fermentation is no longer part of the process.

Until the 1940s, the fizzy drink hadn’t gained much popularity outside of Italy. But during World War II, many allied soldiers developed a preference for sweet sparkling wine. When they returned home to the United States and the United Kingdom, they brought this preference with them. To fulfill the increasing demand in these new markets, many Italian winemakers scaled up their efforts. Mass production started, and the wine got a new name: Asti Spumante. Its reputation was not outstanding, though. It simply could not beat the quality of Champagne. Thus, winemakers decided to relabel their sparkling wine when the region gained DOCG status in 1993. Since then, you will not find the term Spumante on most bottle labels anymore.

Today, it still is not a serious competitor to Champagne in terms of quality. Nevertheless, it is popular all around the world and one of the most-exported sparkling wines in Italy.

HOW TO SERVE ASTI

Asti is delicious as an aperitif as well as a digestif. Due to its low alcohol level, it is perfect for stand-up receptions and garden parties, especially on hot summer days. But you can also serve it with brunch or for dinner.

What Is the Right Glass for Asti?

The right glass for the sweet Italian sparkler is a flute. Just like for Champagne or Prosecco, these tall glasses with narrow openings help to preserve the bubbles better than regular wine glasses.

What Is the Right Serving Temperature for Asti?

Always serve Asti chilled. A serving temperature around 43°F (6°C) is perfect for providing a fresh and bubbly experience.

Should You Decant Asti?

You should not decant sparkling wines. Exposing them to oxygen will cause the bubbles to disappear and thus harm the fizzy experience. After opening the bottle, immediately pour it into glasses and serve it.

HOW TO STORE ASTI

Always store it in a cool and dark place where heat, temperature changes, and sunlight cannot harm it. By doing so, you will preserve its characteristic freshness. A cellar with a room temperature of around 55°F (13°C) is perfect. Make sure to store bottles lying on their side. This position assures that the wine stays in contact with the cork and prevents it from drying out.

Can Asti Be Aged?

Asti cannot be aged. It is produced to be consumed soon after bottling. Storing it in your cellar for years will not improve the drinking experience.

Asti can go off if you expose it to sunlight or heat for a significant period of time. Both can damage the typical flavors as well as the bubbly experience.

How Long Does Asti Last When Open?

When open, the Asti lasts only for a short time. If you put it in a fridge, you can enjoy it for about one week before its bubbles and flavors disappear completely. You better consume it quickly after opening the bottle.

WHICH FOOD GOES WITH ASTI?

Asti is a great wine to pair with a wide variety of dishes. Its sweetness matches sweet desserts, but also salty and spicy main courses.

For instance, you can try it with cured meat. Italian specialties like Salami and Prosciutto or Spanish delicacies like Chorizo and Jamón Ibérico are great matches. That’s also true for snacks like almonds or nuts, and you can even try chips or crackers.

It does not need meat or rather unhealthy snacks, though. If you prefer a plate of raw vegetables like carrots, radishes, or celery with dips and sauces, go for it. The sparkling sweetness of the wine works with these kinds of snacks perfectly. The same goes for starters like salads and light main courses like chicken or seafood.

Finding a main course that makes a good pairing is not hard either. Spicy food from the Chinese, Vietnamese, or Indonesian kitchen works perfectly. And so do the Cajun cuisine, southern barbeque, or Latin-American dishes. Basically, any meal with notes of garlic, chili, ginger, fennel, or similar spices is a great pairing for the sweet sparkler.

Last but not least, you can enjoy it with your dessert. Pick a sweet, fruity dish like a fruit salad or a berry tart. But make sure it is not sweeter than the wine. Alternatively, serve a cheese plate. Soft kinds of cheese like Brie or Camembert and blue cheese types like Roquefort or Gorgonzola combine fantastically with the Italian sparkler.

If you want to enjoy the original Italian taste, make sure to look out for bottles that carry the name “Asti” (with or without “Spumante”) on their labels. As the name is protected by law, producers from other regions than Piedmont may not use it. Be aware that the sole term “Spumante” is not protected, so vintners from all over the world can use it.

Also, make sure not to confuse the sparkling and the semi-sparkling wines. Both are enjoyable, and I encourage you to try and compare them to understand their differences. But if you want the full sparkling experience, search for the Italian original.

Entry-level wines cost around 15 USD per bottle of 750ml, while better styles cost 20 to 25 USD. Try these styles:

For sparkling wine lovers, Asti is a must-know, although it is not a high-end beverage. But because it is sweet, light, and low in alcohol, it is a great sparkling wine for many different occasions. Having a bottle ready for a spontaneous toast never is a bad idea. Make sure to try its semi-sparkling cousin as well to get the full round trip of Piedmont’s sparkling wines.