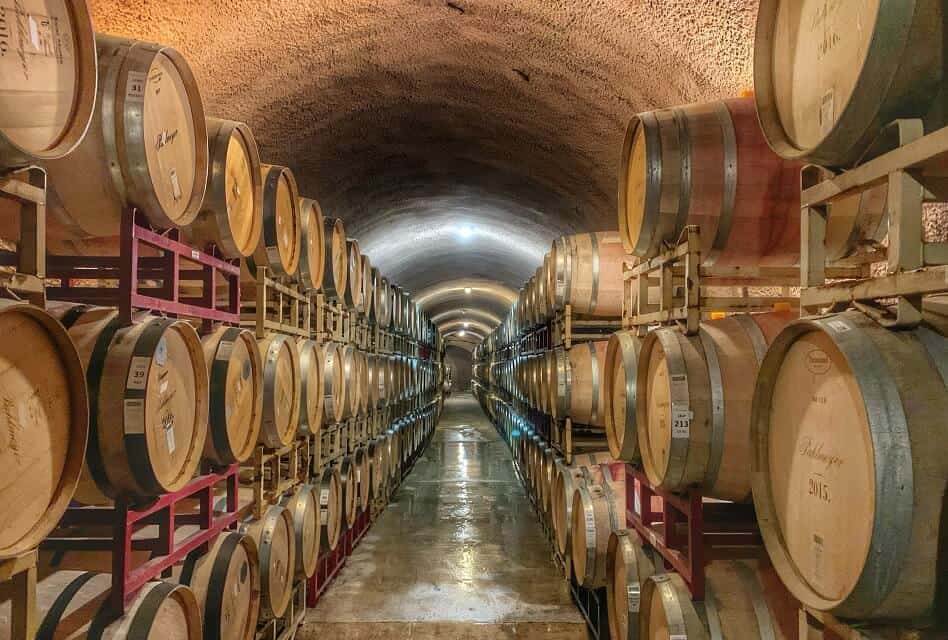 Winemaking is a craft, but you can also consider it an art. And the quality of a wine depends on many different factors, including varietals, weather, and production methods. Oaking is one of these production methods. And exposure to oak wood can significantly increase wine quality and taste. But why is that? What makes oaked wine special?

Oaked wine had contact with oak wood during the production process. Typically, it spent some time aging in oak barrels to improve its quality. During this time, it changed in color and texture and developed new aromas.

Besides barrel aging, winemakers also follow other oaking methods that differ in cost and time. They also use various types of oak to alter their wine’s characteristics. Keep reading to learn about these topics:

THE HISTORY OF OAKED WINE

The practice of oaking wine goes back more than 2,000 years to the Roman Empire. For the Romans, wine was not only a luxury food. It was also an essential part of their diet. Water was often contaminated during these times, and drinking it could result in serious health issues. But wine was safe to drink. And in combination with its intoxicating effect, this advantage made it the preferred drink for many Romans.

Even the Roman armies took wine with them during their campaigns because it could provide extra calories to malnourished troops.

Traditionally, the Romans transported wine in clay amphoras. They could seal these containers to protect the wine and prevent it from going off. But the amphoras’ weight made it difficult to transport big volumes of wine over long distances. Thus, the Romans were eager to find alternative containers.

By that time, traders in Mesopotamia, an area that today corresponds to Iraq, Kuwait, Eastern Syria, and Southeastern Turkey, used palm wood barrels to transport liquids. But palm wood had two flaws: It was expensive and difficult to bend. So it did not qualify as a proper alternative for the Romans.

When the Romans encountered the Gauls that settled in Western Europe, they learned about oak barrels. The Gauls used these containers primarily to transport beer. Oakwood was easy to bend and available everywhere in the forests of Western and Central Europe. Thus, manufacturing oak barrels was much easier than making palm wood barrels. Consequently, it took only two centuries until oak barrels replaced amphoras in the whole Roman Empire.

Soon, the Romans realized that their wines changed their characteristics when interacting with the oakwood. They became softer and smoother, and they also developed new aromas. Based on this insight, winemakers started oaking wine intentionally. And over the centuries, they have developed many different ways to do so.

TYPES OF OAK FOR WINEMAKING

Throughout the centuries, winemakers have developed many different methods to oak wine. Today, different types of oak are used for this purpose. French and American oak are the most common types of woods for oaking wine.

French oak is dominant in Europe, and it’s also the most expensive type of oak. High-quality barrels of 225 liters cost between 800 and 3,000 USD. To produce them, barrel-makers use primarily two species of oak trees:

Quercus petraea (Sessile Oak) grows mainly in the forests of Alliers, Neviers, Tronçais, and Vosges in Central and Eastern France. It has a tight grain, is rather soft, and is rich in aromatic compounds. Among others, French winemakers use barrels made from this wood to make high-quality Pinot Noir wines.

Quercus robur (Pedunculate Oak) comes from the Southern part of France, for instance, from the Limousin region. It contains fewer aromatic components but more tannins, so it imparts more astringency to the wine. Thus, it’s vintners’ first pick to raise the level of tannins in their wines. Many producers of bold Chardonnay wines use wood from this tree for their barrels.

In the United States and most other New World countries, it’s more common to make wine barrels from American oak. Barrels are available for 300 to 800 dollars, so American oak is more affordable than French oak. Another difference is the intensity of flavors the wood imparts on wine: American oak usually provides much stronger aromas than European oak. Two species of trees are predominantly used:

Quercus alba (White Oak) is widespread in the forests of the Eastern United States, but also Missouri, Minnesota, and Wisconsin. It grows faster than European oak species, has wider grains, and contains fewer extractable tannins.

Quercus garryana (Oregon White Oak or Garry Oak) has gained some popularity among barrel makers in Oregon. Its characteristics are closer to the European oak species.

Other Types of Oak

Besides French and American oak, vintners use several other types of oak:

Besides the wood type, the containers for oaking play an essential role in the process. Especially the barrel size is vital. The smaller a barrel is, the higher will be the share of wine that’s in contact with the wood. And the more wine is in touch with the wood, the stronger will be the oak’s impact on the wine in terms of flavor.

Across the world, vintners know numerous types of barrels with different sizes. These are some of the common types:

THE DIFFERENCE BETWEEN OLD OAK AND NEW OAK

Besides the oak type and the barrel size, wood age is another factor that vintners consider when oaking their wines. In general, they differ between new oak and old oak. The nomination doesn’t come from the age of the barrels or the trees they are made from, though. Instead, it refers to the number of times that the barrels have already been used for oaking wine.

An oak barrel is called new when a maximum of three wine charges aged in it. In contrast, an old barrel was used at least four times for aging wine. The older an oak barrel is, the fewer new flavors will it impart on the wine. Thus, to add the typical woody, spicy, and sugary aromas, winemakers need to use new barrels. Nevertheless, aging wine in old barrels contributes to adding structure and making it softer and smoother.

During the last centuries, winemakers used barrels made from different types of wood. Among them were acacia, beech, cherry tree, poplar, and chestnut. None of them provided the same benefits as oak. Most of them are too soft and less dense, so they don’t make stable and airproof containers. Besides, only chestnut wood imposes similar aromas on wine as oak. But chestnut has another problem: It’s prone to woodworms that consume wood and make it brittle and porous. So, in the end, only oak wood makes a good wine barrel.

We’ve already talked about the prices of oak barrels. Depending on the type of wood, they range from 500 to 3,000 dollars for a Barrique of 225 liters. For some winemakers, these prices are too high. Thus, they developed more affordable ways to make oaked wine:

All of these alternatives have a critical disadvantage to barrel-oaking: They don’t expose the wine to air. So wines that are oaked with staves, chips, powder, or oak essence can’t develop the complexity and smoothness that barrel-aged wines have. With this disadvantage, each of these alternative oaking methods is a trade-off between costs and quality.

THE DIFFERENCE BETWEEN ROASTED OAK AND UNROASTED OAK

It is a common practice among barrel makers to expose their casks to fire after manufacturing them. They either light an open fire inside the barrel or use a handheld torch.

This toasting enhances the natural flavors of the oak wood and also activates new aromas that the wood can impart to wine. The longer the toasting takes, the more intense these flavors will be. Barrel makers distinguish three levels of toasting, typically lasting between 20 to 60 minutes:

Toasting is common for barrels, staves or chips, and both American and European oak.

HOW DOES OAKED WINE TASTE?

When wine gets in contact with oak, it slowly absorbs some of the components of the wood. As a result, it changes in color, smell, and taste.

One of the most significant changes affects the level of tannins. Wood, like many other plants, including wine grapes, contains tannins. And the longer it stays in contact with the wine, the more tannins make their way into the wine. As a result, oaked wine is more tannic than unoaked wine.

Oak also adds new flavors to the wine. It contains components called phenols. These phenols contribute new aromas when they get in touch with the wine. For instance, a phenol called Vanillin adds vanilla flavors. Another one, Eugenol, imparts notes of clove. Other aromas that oak can impart on wine are dried fruit, almonds, tobacco, coffee, chocolate, honey, nuts, spices, caramel, woody, and smoky notes.

Another substantial effect is the concentration of flavors. Oak barrels aren’t completely airproof. So the wine inside has a bit of exposure to air and evaporates very slowly. During this process, its flavors concentrate on the remaining wine and create a more intense bouquet.

The contact with air and wood softens and smoothens the wine and gives it a more silky texture. Together with the aromas that the oak imparts on the wine, it creates more complexity that leads to a much better drinking experience.

Finally, oaked wine changes in color. White wine typically gets paler during fermentation in an oak container. In contrast, its color becomes darker if the wine has contact with oak wood only for maturation. For red wine, the change in color isn’t as significant. It takes an enormous amount of time to see a darker and more intense tone of red.

WHICH WINES ARE OAKED?

Many red wines get in contact with oak at some point in the production process. Especially bold wines get their complexity from long periods of oaking. These are oaked wines on the red side:

For white wine, oaking is relatively uncommon. The majority of whites never get in touch with oak. However, there are some exceptions. Here are some examples of oaked white wine:

Shopping oaked wine is challenging because many winemakers don’t clarify whether they oaked their wine on the bottle label. Nevertheless, you can find some indicators:

Oaking is a winemaking technique with so many different aspects that it’s hard to understand it truly just by reading about it. So if you really want to get what the role of oak is, you should compare the taste of unoaked and oaked wines yourself.