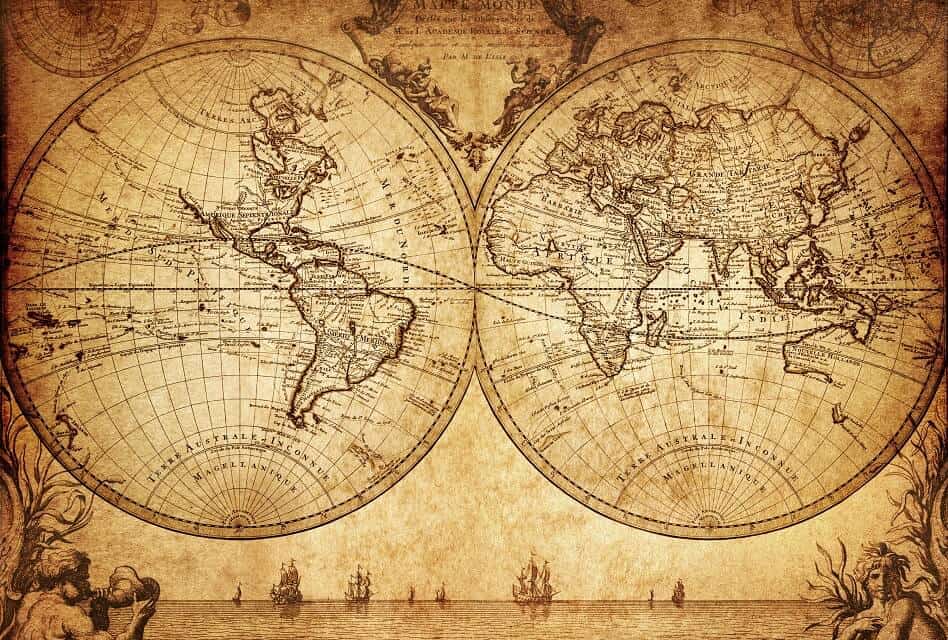 When listening to people who philosophize about wine, you might have heard about the Old World and the New World. And many wine lovers have a preference for wine from either the Old or the New World. But what do these terms actually mean?

WHAT IS THE OLD WORLD OF WINE?

When talking about wine, the term Old World refers to Europe and some North-African and Middle-Eastern countries in the Mediterranean area.

In Europe, this includes the famous South European wine countries France, Italy, Portugal, and Spain and Central European nations like Austria, Germany, Switzerland, and Hungary. Besides, it refers to less popular wine countries in South-Eastern Europe, such as Armenia, Bulgaria, Cyprus, and Greece.

Winemaking regions in the Eastern Mediterranean area, like Israel, Jordan, and Lebanon, also belong to the Old World. In theory, the same goes for countries in Northern Africa. Unfortunately, the political instability and the rise of religious fundamentalism led to a rapid decline in the wine industry in these countries. In the 1960s, wineries in Algeria, Morocco, and Tunisia produced significant volumes of wine and exported most of it to France. Nowadays, only a couple of vineyards still are in business. Another North-African country with few winemaking businesses is Egypt.

WHAT IS THE NEW WORLD OF WINE?

The term New World refers to winemaking countries outside of Europe, including North and South America, Africa, Asia, and Oceania.

Many of them were European colonies in the past. That’s true for the United States, Canada, Mexico, and countries in South America, such as Argentina, Chile, and Uruguay.

Asia and Oceania belong to the New World as well. Australia, New Zealand, and India are engaged in producing wine, but also countries that never have been European colonies, such as China or Japan.

Finally, the Republic of South Africa, as the only wine country in Sub-Saharan Africa, belongs to the New World.

THE HISTORY OF WINEMAKING IN THE OLD AND NEW WORLD

The history of winemaking in Old World countries goes back thousands of years. Archaeologists found devices for wine production in Greece and on the Italian island of Sicily that date back to 4000 to 4500 BC. In the Eastern Mediterranean area, historians found even older evidence that proves the production of wine. Artifacts from Lebanon and Iran date back to around 5,000 BC, and those from Georgia to approximately 6,000 BC.

Due to the intensive trade in the Mediterranean area, wine made its way to most Southern European countries soon. The Greeks built the foundation for the modern culture of winemaking in Europe. Later, the Roman Empire advanced production techniques. With their military conquests, wine and winegrowing spread into most parts of Central and Western Europe.

The winemaking history of the New World is significantly shorter. After discovering the Americas, Spanish and Portuguese colonists brought their knowledge about wine to Central and South America in the 16th and 17th centuries. The reason for this was economic: Wine played an important role in Christian services. And producing it locally was cheaper than importing it from Europe.

In South Africa, Dutch settlers started winemaking in the 17th century. Australian wine is even younger: The first wineries began operating at the beginning of the 1800s. Around the same time, immigrants from Croatia founded the first vineyards in New Zealand.

WINEMAKING IN THE OLD WORLD

Nowadays, the Old World winemaking methods tend to differ significantly from those in the New World.

In the Old World, traditions play a significant role. The focus of many winemakers is to produce wine that represents the characteristics of their home region, the terroir, and the vineyard. And wine laws often force them to do so.

Many wineries are family-owned and handed down from generation to generation. Young winemakers value tradition and follow the same production methods as their parents, grandparents, and great-grandparents. You could say that they consider winemaking an art rather than a business.

It’s not unusual that vine stocks are tens, in some cases, hundreds of years old. To preserve these valuable plants, winemakers use handheld tools. Using modern agricultural machines like tractors could harm the vine stocks. In some cases, the law even mandates this manual labor because the vineyard is a World Heritage agricultural landscape that is protected by UNESCO. For pressing and fermenting the grapes and aging the wine, vintners use many traditional methods too. For instance, some winemakers still crush their grapes by foot.

WINEMAKING IN THE NEW WORLD

As the New World’s history of winemaking is rather short compared to Europe, traditions aren’t vital. Also, wine laws are less strict (sometimes they are non-existing), so winemakers have more freedom in terms of production methods.

As a result, many New World vintners consider winemaking a science rather than an art. They use their freedom by using modern machines and technologies and don’t shy away from experimenting. Typically, their goal is to point out the characteristics of the grapes, not of the terroir.

Aging wine in oak is common in all parts of the world. But the preferences for the type of oak differ. In the Old World, winemakers use neutral (old) oak that doesn’t affect the wine’s aroma significantly. Thus, they can preserve the characteristics of the terroir. In the New World, vintners prefer new oak that imparts creamy flavors such as vanilla or caramel onto the wine.

REGULATIONS IN THE OLD WORLD AND THE NEW WORLD

Winemaking in the Old World is heavily regulated by national laws as well as by the European Union. These laws determine the varietals and ingredients that vintners may use to produce specific types of wine. They also regulate the production methods and the nomination of wines.

Some of them have the purpose of protecting consumers’ health, for instance, by forbidding the use of harmful substances. But others, especially regulations regarding wines’ nomination, aim to encourage winemakers to keep high-quality standards that live up to the reputation of a wine region.

In the New World of Wine, winemakers have more freedom. Especially laws that regulate production methods are less strict than in the big European wine countries. The result of this freedom is the eagerness to experiment.

However, some national governments have implemented rules for wine nominations to protect local winemakers against copycats. For instance, the U.S. Bureau of Alcohol, Firearms, and Explosives (ATF) established a nomination system for American Viticultural Areas (AVA). As of 2019, it recognized 246 AVAs in 33 states, with most of them in California.

As mentioned before, vintners in the Old World usually try to create wines representing the wine region or terroir. As a logical consequence, they label their products after their origin. They use the winery name combined with the name of the wine region, including quality labels like AOC, DOC, DO. For vintage wines, they add the year of the harvest as well. Some producers also mention their home country with a label like “Product of Italy”.

Besides, a couple of vintners provide information about the varietals they used to produce the wine. But especially for high-quality wines, it isn’t common to do so. Often it isn’t even necessary because winemakers must use a specific varietal due to local wine laws.

In contrast, wines from the United States, Australia, or South America usually carry the name of the varietal. Many vintners add the name of their wineries or, in some cases, a specific product name they created. Stating the appellation of origin that indicates the wine region has become more common these days. However, it’s still less usual than in Europe.

These differences result from the more experimental production methods in the New World, but also the climate. Wine countries in the New World are much warmer on average. That means more hours of sunshine per day, higher temperatures, and less rain. These differences are evident if you compare California or Australia to Central European wine countries like France or Germany. But even the Mediterranean countries such as Italy or Spain tend to be slightly cooler than most New World regions, especially in mid-summer. The table below compares some well-known wine regions from different parts of the world in terms of temperatures and rainfall.

In the warmer climates of the New World, grapes ripe earlier and thus acquire more sugar. When this sugar ferments into alcohol, it creates a fuller body.

As winemakers can influence the taste of wine because of the lower regulations, there are plenty of exceptions to this rule, though.

Both the Old World and the New World offer excellent wines, no matter what your preferences are. To fully understand the differences, compare them: Buy an Old World bottle and a New World wine that were made from the same varietal. Try them in a blind tasting and guess which one is from which part of the world.

link to What Is Terroir and How Does It Affect Wine?

The world of wine has its own language, and it might be a confusing one for newbies. Many terms are barely understandable without studying their meaning in detail. Without a doubt, terroir is one of...

Winemaking is a sophisticated and time-consuming process. It consists of multiple stages and can take numerous years until a bottle is ready for sale. At each step of the process, vintners have to...