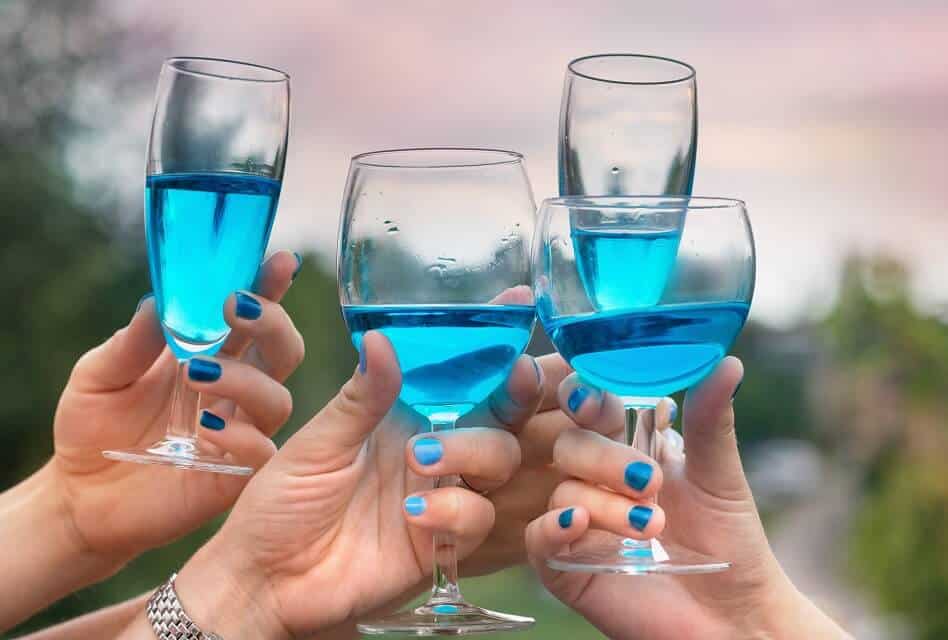 As a wine lover, you know the usual colors of wine: red, white, and rosé. Maybe you also know one of the rarer orange wines. But did you know that some wines are blue? Why is that? What is blue wine, and where does it come from?

Blue wine is regular wine colored with food dye and often sweetened with additives. Most producers use white grapes to make it but color it with pigments from red grape skins. The resulting wine is light and refreshing with perceivable acidity, subtle sweetness, and fruity aromas.

From a legal point of view, the blue drink is not wine, although it undergoes the usual winemaking process. But some additional steps that create the blue color are controversial. This article will clarify how blue wine is produced and why it cannot be called wine in some parts of the world.

WHAT IS BLUE WINE MADE OF?

Blue wine is made from different varietals of grapes, both red and white. Typically, winemakers go for white grapes that produce at least medium-bodied wines such as Chardonnay.

In addition, they use organic food dyes such as indigotin and anthocyanin to color the wine and sweeteners to alter its taste and texture.

Blue wine gets its color from organic compounds that winemakers add to the wine:

All of the ingredients are natural. But due to the artificial addition of pigments, you can argue that the final wine is not a natural product. This dispute was the reason for the European Union prohibiting manufacturers from calling their blue beverages wine.

Blue wine was invented by a Spanish company called Gik in 2015. Its founder Aritz López was eager to create something new, innovative, and provocating. And so he decided to disrupt the wine industry, in which traditions play a massive role.

Gik worked with vintners from different regions in Europe and chemical engineers from the University of the Basque Country to develop a unique process to color wine. They extracted pigments from red wine grapes and other plants and used them to create a blue wine.

The company soon faced resistance from European lawmakers, though. They claimed that the blue drink could not be called wine because it does not fit into one of the 17 categories that define wine in the European Union. Gik tried to fight back and started an online petition, but only 95 supporters backed their efforts. Thus, the company had to relabel its product without using the term wine. Nevertheless, it is still available for sale. They even have created new, similarly controversial wines that are pink, mixed with tea, or enriched with spices.

The story of Gik inspired other winemakers to follow their path. Today, you can find numerous wine-like beverages with different shades of blue.

Just like there is blue still wine, you can also find various types of sparkling blue wine. Most are mixed drinks containing sparkling wine, color agents, and sweeteners. For instance, the blue drinks by the Italian producer Blumond are made from Prosecco and Blue Curacao, a blue citrus liquor.

Blue sparkling wines are extremely controversial among winemakers, too. And in many countries, they may not carry protected names such as Prosecco or Champagne.

Most blue wines taste similar to white wines. They are light- to medium-bodied, have a good level of acidity, and offer aromas of citrus and tropical fruits. In some cases, they also feature red fruit aromas like raspberry or cherry. As they contain sweeteners, the wines are typically a bit sweeter than dry white wines, though.

Some styles can be very sweet and bolder, with a denser texture. They remind you of a cocktail rather than a wine.

Blue wine is relatively low in alcohol. Most styles have between 9 and 12%, similar to light white wines.

HOW DO YOU SERVE BLUE WINE?

You can serve it with food, but you can also enjoy it on its own. Especially on a hot summer day, a chilled glass is a refreshing experience.

What Is the Best Glass for Blue Wine?

A standard white wine glass is perfect. As blue wine doesn’t require any specific glass in terms of aroma, you need to worry about only one thing: temperature. As the wine should be very cool, you want to serve it in small portions. Otherwise, the wine might heat up too quickly. Therefore, a smaller standard wine glass is the right choice.

What Is the Optimal Serving Temperature for Blue Wine?

Blue wine should always be chilled. In most cases, you can go for temperatures even lower than for white wines. Aim for 39 to 43°F (4-6°C).

Should You Decant Blue Wine?

Blue wines are not very complex and don’t require oxygen to release their full potential. Thus, it doesn’t make sense to decant them.

You can enjoy blue wine with most dishes that pair well with light white wines, for instance:

WHERE TO BUY BLUE WINE

Finding blue wines can be challenging for several reasons:

If you want to try blue wines, the easiest way is to stick to the originals by Gik. You can buy them directly from their website. European customers can get them from their European online shop.

Besides Gik, check out the wines by Perfer (US Shop / EU Shop):

Blue wine might be one of the most controversial wines, and it is definitely not every wine lover’s cup of tea. But for those who are open-minded, it can be an interesting experience. And for sure, it’s a visual highlight for every party. So why not try a glass?